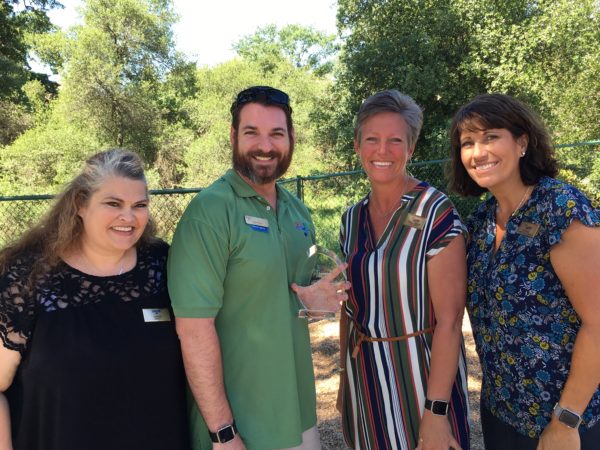 ROSEVILLE, Calif., May 4, 2017 – Childtime is proud to honor teacher Travis Poteat from its Roseville, Calif., school location as this year’s recipient of the company’s highly coveted Lisa Miskimins Mentorship Award.  Poteat was chosen from among nearly 18,000 early education teachers nationwide from Childtime and its sister schools in Learning Care Group.

This mentorship award was established in the name of Lisa Miskimins, Senior Vice President of Operations – an outstanding leader and advisor to many in the early childhood education industry.  With this distinction, each year, the company recognizes a teacher who shows remarkable leadership attributes and an ability to guide others to perform at their best.

A Preschool Team Lead, Poteat is a highly experienced educator who plays an integral role in hands-on training for the company’s newly hired early preschool, preschool and pre-k teachers. He is also the District Mentor Safety Captain, coaching teachers who serve as the company’s school-based Safety Captains throughout the Sacramento- Roseville-Bay Area.  Poteat demonstrates one of the greatest hallmarks of a gifted leader:  the ability to recognize and encourage leadership traits in others.

“Travis’ dedication to training and mentoring colleagues on our curriculum, operational processes and safety protocols is truly exceptional,” said Teri Davies, West Division Vice President for Learning Care Group.  “Besides doing a terrific job teaching our children, he has consistently gone above and beyond to support his colleagues in achieving their full potential.  We deeply appreciate everything he does to inspire excellence and guide our associates in ensuring a safe and nurturing learning environment.”

COLLEYVILLE,Tex., May 11, 2018 – Learning Care Group is proud to honor Simone Palmer from its Tutor Time location in Colleyville, Texas as this year’s recipient of the company’s prestigious Teacher of the Year award. Palmer has been selected in recognition of her remarkable work in bringing lessons to life in creative and engaging ways […]

NOVI, Mich., April 27, 2017 – What spicy words have you used today? At Childtime, preschoolers are learning fun and powerful new ways to express themselves with surprisingly sophisticated vocabulary. Words like enormous, creeping and fierce are celebrated as children first discover, then try out newly acquired expressions. “Children need to have a rich and […]